Today the US Supreme Court upheld the constitutionality of Obama’s health care law. Like many non-conservatives, I was overjoyed by this news. At the same time, I recognize that many on the right are dismayed.

However, when I ask myself (honestly) why I am overjoyed, the answer is not what I would hope. Fortunately, it is not because those on the right are dismayed. But it is also not because now lots of people will have good health care, or because there will be fewer horror stories emerging about those without coverage. Yes, I believe these things will result, and I am glad about them in a rational kind of way. But my emotional response comes because the US government has affirmed in a certain way that it reflects my values. I think we are all subject to this kind of emotional bias, something important to recognize.

END_OF_DOCUMENT_TOKEN_TO_BE_REPLACED

Update: The agent in charge of Fast and Furious defends it

I argued recently against all the media criticism of the program Fast and Furious that followed guns sold to Mexican drug dealers. Finally, the Washington Post published a story presenting at least a little bit of the program’s justification, from the persepctive of the ATF agent responsible.

The story was hardly a ringing endorsement of what I’ve been saying, but at least it acknowledges that there is such a perspective…

I just posted on why it is so hard to find ways to prevent war crimes – aside from all the internal politics of places like the UN and the Western powers, it is rarely possible to know with confidence what to do, or even to know that intervention won’t make things worse. I argued that two prerequisites for addressing these problems are (a) a strong disincentive for any rulers contemplating atrocities, and (b) a way to impose or implement a stable long-term government in conflict zones.

To this end, I propose the creation of an international body responsible for prevention and enforcement of mass atrocities. This body would have substantial diplomatic and military power and would be largely independent. It would be mandated to use its power in ways that would put real, meaningful pressure on governments to find peaceful long-term solutions to their internal conflicts.

END_OF_DOCUMENT_TOKEN_TO_BE_REPLACED

Syria, Rwanda, and the difficulties of preventing atrocities

Like many people, I am continually disturbed by the news of atrocities coming out of Syria these days. I would love to find a way for the violence to end and peace to be restored. But the more I think about these issues, the more depressed I become. I simply do not think anyone knows how to solve this problem, or many others.

I recently heard an interview of CBC radio with Roméo Dallaire, the Canadian general who tried to stop the genocide in Rwanda in 1994 but was ordered to stand down by his higher-ups in the UN. (For those who saw the movie Hotel Rwanda, he was played by Nick Nolte.) Dallaire argues forcefully that it is a lack of political will, and a lack of concern for places where powerful nations do not have strong interests, that results in atrocities such as those he witnessed in Rwanda. I am sure there is a lot to be said for this.

END_OF_DOCUMENT_TOKEN_TO_BE_REPLACED

On rug dealers, typos, and blogging…

In case you haven’t noticed, my last post featured a rather major typo in the title, of all places: “Drug dealers” became “rug dealers.” As my father promptly noted (as part of his continuing critique of blogs and blog culture), proofreading has much to recommend it, and hastily written posts can damage their author’s credibility. And yet the irony is that I did proofread the whole article. My brain just saw what it expected to see, not what was there…

In defence of haste, I know myself well enough to know that my choice is not usually between a well-written, perfect post and an imperfect post; it is a choice between imperfection and nothing at all. This is partly a function of my particular ineptness for proofreading my own writing (I remember too well what I meant to say and can’t see what I actually said), but it is also a function of laziness. As a professional researcher, I spend a lot of time getting details of research exactly right. It takes forever to publish things as a result, and a lot of good ideas never get developed because I don’t have limitless time.

END_OF_DOCUMENT_TOKEN_TO_BE_REPLACED

In defence of giving guns to drug dealers

Recently the US Attorney General Eric Holder has been embroiled in a scandal related to a law enforcement program called Fast and Furious that sold guns to drug dealers. One of these guns was used in a shootout in which a US Border Patrol agent was killed. FaF has been roundly condemned from all sides, including by Republicans, the Attorney General, and liberal columnists. And as far as I can tell, they are all wrong in their condemnation. Yes, I am actually arguing for giving guns to drug dealers even when those same guns may later be used to shoot law enforcement agents.

END_OF_DOCUMENT_TOKEN_TO_BE_REPLACED

The science behind “Everything in moderation”

We’ve all the heard the famous quote “Everything in moderation, including moderation” (attributed variously to Oscar Wilde, Horace Porter, and Petronius), and it probably strikes most of us as good advice. Of course, we can’t apply it too broadly: certain things are better in less than moderation (cyanide and genocide, for example) while others should be taken in more than moderation (walks in the woods and Cirque du Soleil performances come to mind). But is there any real reason to believe the principle is more than an old wives’ tale?

Yes, in fact. Emerging research (including mine, self-congratulatory back pat) is increasingly showing both the evolutionary and physiological bases for this principle, at least in regards to diet and exercise. Let’s look at this from three perspectives:

END_OF_DOCUMENT_TOKEN_TO_BE_REPLACED 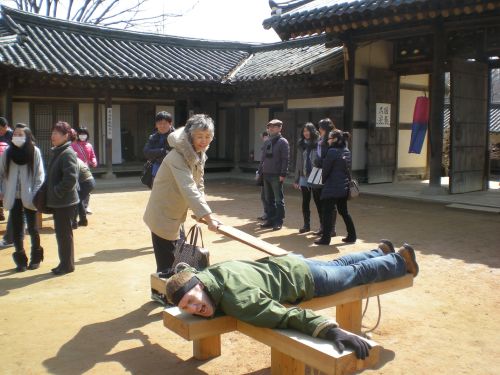 Some of my colleagues seemed quite offended by this idea over the lunch table the other day. I hope it will be provocative and stimulate lots of comments! (The picture, by the way, is me undergoing corporal punishment from my mother-in-law on my last trip to Korea 😉 )

My starting point is that the criminal justice systems in most developed countries spend a huge amount of money on trials and incarceration, and appear to get relatively little benefit in terms of deterrence. How do we know that there’s little benefit? Look at how low crime rates are in places like Japan or Austria. I doubt these countries are punishing murderers much more harshly than in the US, where murder rates are 10-fold higher, or than Honduras, where they are more than 100-fold higher. Rather, cross-country comparisons (in my crude, quick view) appear to show that low crime rates are largely due to a combination of social cohesion, community values, and limited poverty.

In addition, the US constitution (and probably some other constitutions – I’m not sure) explicitly prohibits “cruel and unusual punishment.” The problem with this phrase is that once any punishment becomes unusual, it can never be re-introduced (it will always be unusual thereafter), so over time the number of potential punishments in the arsenal of law enforcement becomes limited. Currently, incarceration and fines seem to be the only real punishments available. Fines will get you only so far – many criminals are too poor to pay or too rich to care – and so effectively incarceration is all we can do to deter most major crime. And, as I just mentioned, this appears to be quite expensive and not very effective. Going to jail appears increase the probability of becoming a repeat offender.

So why not institute a system of corporal punishment to complement the system of incarceration?

END_OF_DOCUMENT_TOKEN_TO_BE_REPLACED

What we really know about nutrition, part 2

In the last installment of this series on nutrition and science, I argued that epidemiological studies on associations between diet and health are extremely difficult to conduct well. But aren’t there other ways we can get information on how to eat well? Yes. We know the biochemistry of molecules such as vitamin E relatively well, and we know a lot of what they do and why they are essential in the body. We have lots of animal studies on nutrition, both in mice as model organisms, and for domesticated animals such as dogs, chickens, cows, and so forth. These animal studies do what human studies can’t: they perform controlled experiments to identify causal relationships.

In addition to these basic science studies, there is also a lot of circumstantial evidence about nutrition. For example, there are studies that measure the nutritional content of hunter-gatherer diets. There are studies comparing the intake of different nutrients across species. And there are some lessons from basic evolutionary principles that can be applied to nutrition.

What can we learn from all this? The take-home message is that the details are very complicated and poorly understood, but there are some broad brush recommendations we can make. In my opinion, most of the basic science does little more than generate confusion about the details, and the most useful lessons come from the circumstantial evidence.

END_OF_DOCUMENT_TOKEN_TO_BE_REPLACED

The US constitution: a document for a more imperfect world

One can look at this in several ways. On the one hand, the constitution must be doing something right to have persisted for so long. And on the other, there are probably ways in which it was built for a world quite different from our current one, and thus probably some major ways it could be amended or re-interpreted that would make it work a lot better. I think one of the most important fault lines between left and right in the US is on precisely this issue: people on the right look at the constitution as essentially a sacred document (almost religious, really), and think it represents holy principles in a pure way. (See this unreasoned blog post for a good example.) In this view, the constitution’s perfection is beyond question, and it is our duty as citizens to defend it and the way of life it represents. People on the left agree with the underlying principles in the document, but are less likely to view the document itself as key. They recognize that other countries have since written other constitutions that do as good a job (or better) of protecting those principles. And they see practical realities of life in a changed and changing world, and want to adapt the constitution to these new realities without losing the most important aspects of the principles.

It should be clear that I fall clearly in the latter camp – always a pragmatist, rarely choosing principle over real-world consequences. Much has been made of how the constitution did not foresee many aspects of technology, leaving modern jurists to try to apply the old principles appropriately: what does “unreasonable search and seizure” mean in a world with internet and GPS trackers? Does the ability of the wealthy to gain disproportionate access to new media such as television advertising change the way we think of money and free speech in politics? These are interesting questions, but this post skirts them and tackles a more fundamental issue: the US constitution was written at a time when the world was a much harsher place, and it was designed to avoid the worst things that could happen in that world, not to aid us in further improving the safer, more stable world we inhabit today.