Continuing my stream of gun-control-related posts, a brief reflection on the implications of the gun rights folks’ positions.

Briefly, they are arguing that the solution to gun crimes is more guns in the hands of everyday folks. Rep. Louie Gohmert on Newtown: “I wish to God [the Sandy Hook principal] had an M-4 in her office locked up — so when she heard gunfire, she pulls it out and she didn’t have to lunge heroically with nothing in her hands.” The NRA’s Wayne LaPierre today: “The only thing that stops a bad guy with a gun is a good guy with a gun.”

What this means is that they wish to push for a society where there is not only the right to own whatever guns we can imagine, but that not owning one becomes dangerous and an abdication of moral responsibility. What if a school principal doesn’t like guns, or is not a good shot? Would they have us move toward a world where she could lose her job?

Up until recently, the right to bear arms did interfere with the right to life (for murder victims) but did not interfere with the right of others not to bear arms. But these recent statements suggest the gun rights folks would like to move us to a world where, though there is a theoretical right not to bear arms, no one would feel safe without one, and some people might be obliged to have them at work. Personally, I’m happy up here in Canada where people would be disturbed if I carried around a handgun, rather than feeling pressured to.

It’s worth noting that the gun manufacturers are a major force behind many gun rights organizations. Hmmm, I wonder what they would feel about a world where more and more people were obliged to buy their products? The gun rights folks like slippery slope arguments. Well here’s one for them: if we don’t stop this craziness now, we’re moving toward a world where no one can feel safe unless they have a gun, effectively depriving us of the right to live without guns.

Guns are (probably) not responsible for the high murder rates in the US: how to understand the stats

As I stated in my last post, I support gun control, and I am really appalled by what happened in Newtown. But this is one (rare) case where I think the people on the right may understand the facts better than those in the center and the left. Two of my favorite columnists, Charles Blow at the NY Times and Fareed Zakaria at the Washington Post, had recent columns (here and here) on how the US is the clear exception in the developed world on both gun ownership and murder rates, and suggesting that solution is simple: limit guns, have less murders.

These are nice, well-argued columns. Unfortunately, they appear to be wrong. I’ve been digging in the data a bit, and I think both of these columnists have taken correlation to be causality. (Note: Correlation can sometimes imply causality, contrary to popular belief – one needs to know how to do the right analyses and have the right data. But this is not the case here.) So I will work you through the data, as an example of how to do a more thorough statistical analysis of a question like this. Don’t worry, I won’t get too technical, and I’ll keep it intuitive…

END_OF_DOCUMENT_TOKEN_TO_BE_REPLACED

The misdirected focus on gun control

I don’t own a gun. I don’t have any interest in owning a gun. I don’t like guns. I am appalled by the Newtown massacre and other such massacres. I believe rational gun control laws (limits on magazine capacity, an assault weapons ban, background checks, handgun regulations) would be a good thing.

But despite this, I am not convinced that it is a good idea to pursue gun control now, and I strongly support Obama not having pushed for gun control earlier. The reason is simple: like Obama said about pot-smokers, there are bigger fish to fry. Gun deaths are horrible, but so are cancer deaths and traffic accident deaths. It is normal that we as citizens feel more appalled by some deaths than others, but one important role of government is to try to save all lives across the board, without necessarily prioritizing those with more emotional tug.

END_OF_DOCUMENT_TOKEN_TO_BE_REPLACED 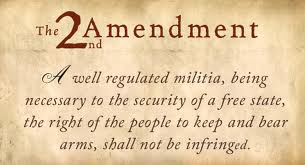 There you have it. The bizarrely punctuated second amendment to the US Constitution that has become the basis of the bizarre gun-rights movement in the US, people that make bizarre statements like “I wish to God [the Newtown principal] had an M-4 in her office locked up — so when she heard gunfire, she pulls it out and she didn’t have to lunge heroically with nothing in her hands.”

Living in Canada (or almost anywhere else in the world), one looks on in bewilderment at the awful tragedy in Newtown, Connecticut and at the utterly incomprehensible refusal to have sensible gun regulations in the US. President Obama has promised action, and the NRA has fallen silent, but in two weeks the heat will have died down and the gun enthusiasts will start to speak up again.

So, in the spirit of responding in kind to gun enthusiasts’ absurd interpretations of this muddled text, here is a tongue-in-cheek idea for how to adhere faithfully to the 2nd amendment:

END_OF_DOCUMENT_TOKEN_TO_BE_REPLACED

Yesterday I was talking to my banker about the government-sponsored education savings plans available here in Canada. With a child on the way, I wanted to inform myself about the options. I was stunned by what I learned – I can contribute up to $2500 per year to an account, and the government will chip in an additional 30%. All interest is tax-free until withdrawn, and then is taxed to the child/student (who may have no tax liability at age 18). Given that the costs of education are already really low here compared to the states (about $200 tuition per session for CEGEP, the two-year program between high school and college, and about $4000 per year for university), most of the savings can be used toward room and board. (As an example, here are the current tuition charges for a Bachelor’s in Arts and Sciences at McGill, the best university in Quebec and one of the top twenty in the world, for a Quebec resident. $2200 for tuition, $3700 after adding in all fees and mandatory insurance (such as dental).)

Coming from the States, this is amazing. Tuition at Harvard is now $37,500 per year, and with estimated living and other expenses this climbs to at least $58,000. Again, that’s per year. I know there are some education savings plans available in the US, but I’m pretty sure no state offers to contribute 30%. So my first reaction on hearing this was to be really really impressed with Canada (once again). Yes, taxes are high, but health care is free, day care (in Quebec) costs $7 per day, and now this. Plus, the banking system is stable, the people are friendly, and the beer is excellent. What’s not to love? END_OF_DOCUMENT_TOKEN_TO_BE_REPLACED